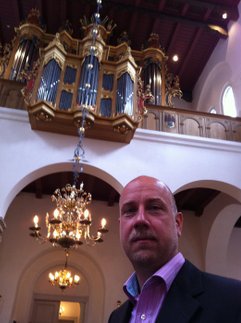 Abram Bezuijen (b. 1966) studied organ at the Rotterdam Conservatory with Arie J. Keijzer, and piano with Frans van Hoek. In 1990 he earned the diploma for Music Pedagogy and in 1991 that for Performing Musician (organ). He received a scholarship, which he used for further study with Prof. Harald Vogel in Germany.

Since 1992, he has been studying contemporary Norwegian organ music, wich has resulted in first performances of pieces especially written for him. Since 1997 he has been cantor/organist at the Haug kirke in Hokksund, Norway, where he is also artistic director of the Eiker Musikkfestival.

Abram Bezuijen plays concerts throughout Europe and has made various CD and radio recordings. Bezuijen performed the complete organ works of J.S.Bach on the beautiful Ahrend organ in the Haug church.

Abram has also been used as a soloist with various orchestras, including the State Chamberorchestra of Belarus, in concertos of Poulenc, Rheinberger and contemporary composers.