The Nordic Organduo has played together since 2012 and perform original works as well as an orchestral repertoire. Their programmes are usually a fine blend of works; and can include works as "Bolero" by Ravel or original works as "Rhapsody" by Naji Hakim and the Sonate in d minor by Gustav Merkel.

The duo attaches particularly importance to playing Norwegian works and has played works by Sverre Eftestøl, Gisle Kverndokk and Stig Wernø Holter. JeeYoung and Abram have played over 60 concerts together both in Norway and abroad.

Scored 6 in the newspaper    Fredrikstads Blad

The unusual concert programme was performed to a high technical and musical level.

New this time was orchestral music by Saint-Saëns, Tchaikovsky and Ravel, music it would be hard to imagine could be played on an organ of the type installed in Fredrikstad church. The talented musicians had worked very hard adapting the tonal sound for the instrument. The concert began with Mozart’s Fantasy which raised the bar high! 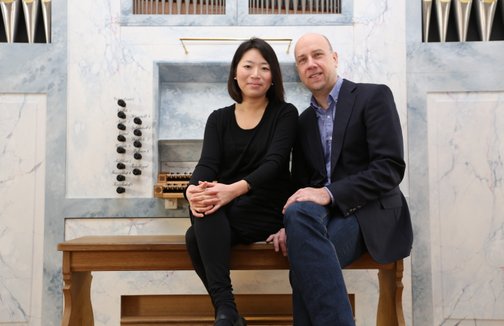